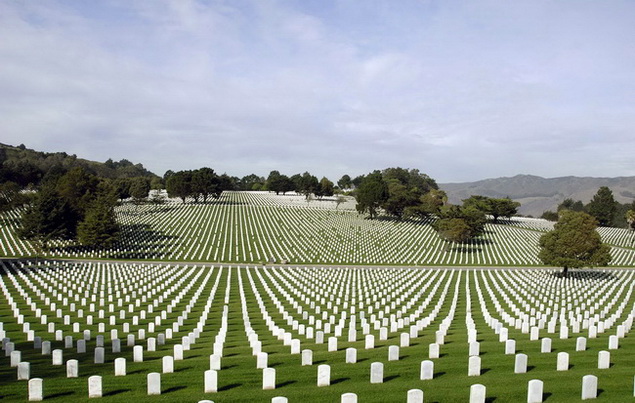 Every country that has survived internal conflicts, revolutions and wars has memorial sites where victims of such conflicts are buried. Here human memory and history meet, here descendants remember their fallen ancestors. In the United States, a great country with a complicated history, there are also such places. Perhaps the most important of them is famous not only in America – Arlington National Cemetery.

Arlington Cemetery is located in Virginia, but only the Potomac River separates it from Washington, D.C., the capital of the United States. You can come here even by taking the Metropolitan Subway, or you can walk from the Lincoln Memorial, on the so-called “bridge of reconciliation.” Tens of thousands of Americans and tourists from around the world come to this unusual cemetery each year, and even the nation’s leaders regularly visit.

The history of the cemetery begins in the 19th century, when the American Civil War between the South and the North, the war to abolish slavery, broke out. It left a profound mark on the development of the country and gave its history many extraordinary personalities. One of them was General Robert E. Lee, who did not share the “slave-owning” views of the Southerners and who had initially served in the Army of the North, but who did not want to fight against his native Virginia. The general ended up in the Confederate (Southern) army, and soon even led it.

The Northerners considered the general a traitor worthy of all punishment. In particular, it was decided to seize his estate in Arlington, near Washington. And so that the disgraced Lee would never want to live here again, the Northerners began to bury the soldiers who had fallen in battle on his land. The calculation was simple: even if the estate somehow reverted to Robert E. Lee, he would no longer dare spend his days here.

Decisions made during wars and revolutions are rarely approved by the letter of the law. Such was the case this time. At the end of the war, the general, with the help of the Supreme Court, recovered his estate and lands, but by then there were the graves of thousands of soldiers here. So Robert E. Lee sold the newfound estate to federal authorities. Thus Arlington Cemetery became one of the national treasures of the United States.

From Unknown Soldier to President

Today’s Arlington Cemetery covers nearly three square miles. Since the first burials in 1865, about 400,000 people have been buried here. The cemetery is called a military cemetery, which is how it began. Until our days mostly military men or their close relatives are buried here.

However, over time, the list of “residents” of the cemetery has slightly expanded. Now it is allowed to bury here former presidents and presidents of the Supreme Court, as well as persons who have been awarded some important state decorations (a strict list of awards is approved).

The area given for burials is rather hilly. However, the graves are arranged in such a way that from any point in the cemetery they look as strict even lines. The tombstones are almost all the same, they are small stones of white marble with minimal information. The exceptions are the graves from the Civil War era, when a variety of monuments were placed on the graves.

On one of the green hills of the cemetery is a beautiful building with white columns. It is the mansion of Robert E. Lee himself, beautifully preserved. Inside the house there is now a small museum and a memorial to the general where you can come for a tour.

But the most famous building on the cemetery grounds is the white marble Memorial in the form of a huge amphitheater. Here, on Veterans Day, memorial services are held, attended by the current president of the country. There are always a lot of tourists at the Memorial, as well as throughout the cemetery. Surprisingly, they behave quietly, even the school groups are unusually silent.

In addition to General Lee’s mansion and the Unknown Soldier Memorial, tourists who come here usually visit President Kennedy’s grave, where the Eternal Flame burns. His wife Jacqueline and his two brothers are buried next to him. In addition to Robert Kennedy, another American president, William Taft, is buried in the hills of Arlington.

Tourists also visit the graves of several astronauts from the space shuttles Challenger and Collabria. The last resting places of the famous polar explorer Robert Peary, musician Glenn Miller and boxer Joe Louis are not neglected. Notably, in fact, Glenn Miller’s grave is symbolic, for he supposedly died on a combat mission in 1944 over the English Channel, and no body has been found. Nevertheless, grateful Americans “buried” their idol in such a glorious place, as a sign of endless respect.

The wide paths of Arlington Cemetery are driven by small electric cars, you can use them to move around its considerable territory. Burials are still going on here, two to three dozen a day. The burial ceremony is quite sumptuous, the deceased being carried in a beautiful carriage by six horses.

A wide variety of people are buried here. Sometimes they were bitter enemies in real life, sometimes they adored each other. These people did sometimes completely different things. But all of them, without exception, did much to strengthen their country and its glory. Perhaps that’s why visitors come here, to better understand: everyone may see their country’s ways differently, and serve it differently. But everyone should love America as the men lying under the white marble on the green hills of Arlington loved it.